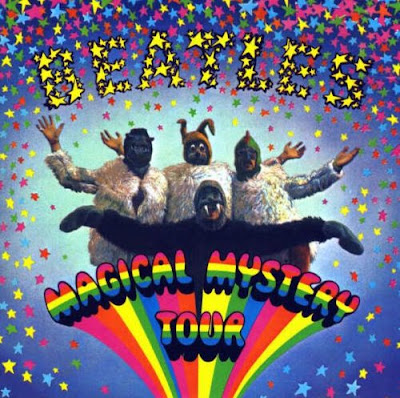 Magical Mystery Tour
MAGICAL MYSTERY TOUR
(Lennon/McCartney)
JOHN 1972: "Paul wrote it. I helped with some of the lyric."
JOHN 1980: "Paul's song. Maybe I did part of it, but it was his concept."
PAUL circa-1994: "'Magical Mystery Tour' was co-written by John and I, very much in our fairground period. One of our great inspirations was always the barker: 'Roll up! Roll up!' The promise of something-- the newspaper ad that says 'guaranteed not to crack,' the 'high class' butcher, 'satisfaction guaranteed' from Sgt. Pepper... You'll find that pervades alot of my songs. If you look at all the Lennon/McCartney things, it's a thing we do alot."

FOOL ON THE HILL
(Lennon/McCartney)
JOHN 1980: "Now that's Paul. Another good lyric. Shows he's capable of writing complete songs."
PAUL circa-1994: "'Fool On The Hill' was mine and I think I was writing about someone like the Maharishi. His detractors called him a fool. Because of his giggle he wasn't taken too seriously... I was sitting at the piano at my father's house in Liverpool hitting a D6 chord, and I made up 'Fool On The Hill.'"
FLYING
(Lennon/McCartney/Harrison/Starkey)
PAUL circa-1994: "'Flying' was an instrumental that we needed for (the film) 'Magical Mystery Tour' so in the studio one night I suggested to the guys that we made something up. I said, 'We can keep it very, very simple, we can make it a 12-bar blues. We need a little bit of a theme and a little bit of a backing.' I wrote the melody, otherwise it's just a 12-bar backing thing. It's played on the mellotron, on a trombone setting. It's credited to all four (Beatles), which is how you would credit a non-song."
BLUE JAY WAY
(Harrison)
GEORGE 1968: "Derek Taylor got held up. He rang to say he'd be late. I told him on the phone that the house was in Blue Jay Way. And he said he could find it okay... he could always ask a cop. So I waited and waited. I felt really nackered with the flight, but I didn't want to go to sleep until he came. There was a fog and it got later and later. To keep myself awake, just as a joke to pass the time while I waited, I wrote a song about waiting for him in Blue Jay Way. There was a little Hammond organ in the corner of this house which I hadn't noticed until then... so I messed around on it and the song came."
YOUR MOTHER SHOULD KNOW
(Lennon/McCartney)
PAUL circa-1994: "I dreamed up 'Your Mother Should Know' as a production number... I've always hated generation gaps. I always feel sorry for a parent or a child that doesn't understand each other. A mother not being understood by her child is particularly sad because the mother went through pain to have that child, and so there is this incredible bond of motherly love, like an animal bond between them. But because we mess things up so readily they have one argument and hate each other for the rest of their lives. So I was advocating peace between the generations. In 'Your Mother Should Know' I was basically trying to say your mother might know more than you think she does. Give her credit."

Collection: In Their Own Words