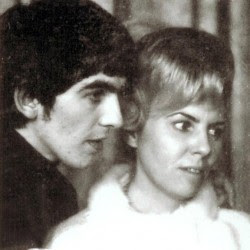 The kid brother she had known since he was eight hours old had grown up to become a world-famous Beatle.
But George Harrison’s big sister Louise today reveals the crucial part she played in the Fab Four’s big American break.
The late George will next week be honoured with his very own star on the Hollywood Walk of Fame.
And nobody will be prouder than Louise, who had moved to the States with her mining engineer husband Gordon in 1963 just as Beatlemania was gripping Britain.

Leafing through never-before-seen photographs in an intimate family album, Louise, now 78, says: “Back in 1963 no one had heard of The Beatles in America. It was all Elvis and do-wop music.
“Their records were not being played on the radio by any stations, and without that exposure they would never sell any records.”
Louise wrote to the band’s manager Brian Epstein offering her help in plugging the records across the Atlantic.
Epstein replied: “I will really be more than grateful for anything you can do because we are really anxious indeed that the records will eventually ‘break’ in the States.”
“I was a timid housewife with two small kids, but I wanted to do all I could to help my kid brother,” she says.

A succession of US radio DJs refused to play their songs – but then Louise urged Epstein to get the band on the highly popular Ed Sullivan TV show.
The Beatles were getting huge and Epstein was inundated with calls asking them to perform but she says it was her Ed Sullivan tip-off which helped persuade the manager.
“Brian said he hardly took any of the calls asking The Beatles to perform, but because I had told him about Ed Sullivan he decided to take his call,” she says. “And I’m sure he was glad that he did!”

A record 72 million people watched the show – and Beatlemania took off across the US. As she thumbs through hundreds of snaps of her family and The Beatles, she recalls that historic first visit to New York in November 1963. “As we got in the car there were girls everywhere and they were climbing on the top of the limo, waving at us and screaming,” she smiles.
“We drove down the street very slowly so they would not fall off, but there were handbags and shoes flying all over.
“It looked as if a hurricane had gone through the place.”
George died in 2001 aged 58 from lung cancer after a four-year fight against the disease.
His widow Olivia and son Dhani are expected to be at the Walk of Fame ceremony on Tuesday.

The Beatles have a shared star on the fabled Walk, but only George and John Lennon, shot dead in 1980, have been individually honoured. Louise, who after almost 50 years in America still retains her British accent, remembers her little brother with huge fondness. “George was a smashing kid, always happy and smiling,” she says. “I knew him from when he was eight hours old.
“He was a great brother and I have so many happy memories of him.
“He had very simple tastes, and was not flashy or showy. I think as people got to know The Beatles they realised that.
“He loved being a Beatle but I think, like the others, he would have swapped all the fame that came with it for just being a good musician.”

Louise now manages a Beatles’ tribute band called the Liverpool Legends – and during the interval she answers questions from the audience about Beatles trivia and later signs autographs. However, George did not speak to her for six years after she opened a bed and breakfast called A Hard Day’s Night in her home of Benton, Illinois.
Two weeks before he died, George relented and they healed the rift as he lay in a New York hospital.
“I like to think that George would approve of what I am doing now,” says Louise. “I was part of that Beatle family, and it is gratifying to know that such a positive message is still being put out.
“George was always so proud of his music with The Beatles and I am sure he is looking down from heaven smiling and seeing what his ‘big sis Lou’ is doing.”