43 years after canceled concert, Israel is ready to rock with a Beatle

JERUSALEM: In 1965, when Israel did not yet have television and public entertainment consisted largely of kibbutz songfests celebrating the wheat harvest, the Beatles were booked for a concert here. To young Israeli fans, it seemed an impossible dream.
And so it was. The official permission required to withdraw precious foreign currency to pay the band was denied because a ministerial committee feared the corrupting influence of four long-haired Englishmen singing about pleasure.

As the committee report put it, "The Beatles have an insufficient artistic level and cannot add to the spiritual and cultural life of the youth in Israel."
Since then, especially in recent years, Israel has expressed embarrassment about the episode and tried to make amends. Last January, it sent a letter from its London embassy to the two surviving former Beatles, Paul McCartney and Ringo Starr, asking forgiveness for the "missed opportunity" to have the band that "shaped the minds of a generation, to come to Israel and perform before the young generation in Israel who admired you and continues to admire you." The artists were asked to again consider coming to perform.

There was little progress until recently, but McCartney has been booked for a huge outdoor concert in Tel Aviv on Sept. 25. And nearly everything about the event - the $8 million price tag borne by a high-flying Israeli financier who expects to turn a profit, the tickets selling for hundreds of dollars that are being gobbled up through Internet sales, indeed its very existence - is a parable of a nation transformed.

The promised concert has led many here to reflect on the cocooned simplicity of life only four decades ago.
"I had just gotten my first LP record for my bar mitzvah from my two best friends, and it was by the Beatles," recalled Yoel Esteron, 55, editor of the daily business newspaper Calcalist. "And then they canceled the concert. We still had no television and only official radio stations. We were living in a cultural ghetto; the country was Bolshevik. Teenagers and their parents debated it for weeks. Every teenager was furious."
For Yossi Sarid, a leftist former Parliament member and government minister, McCartney's arrival is an opportunity to reminisce and set the record straight about his father, Yaakov Sarid, who was the director-general of the Education and Culture Ministry and an official involved in canceling the original concert. 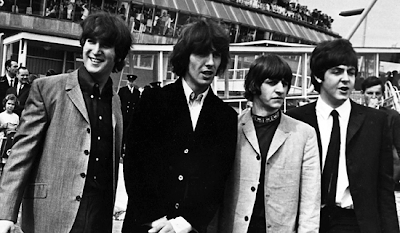 The Beatles in London before departing on a tour of the United States in 1965.

In a front-page article in the newspaper Haaretz on Monday, Yossi Sarid said the real cause of the cancellation was a rivalry between impresarios at the time. One had been offered a Beatles concert in 1962, before their star had risen, by the mother of the Beatles' manager, Brian Epstein, and had turned them down. When a competitor booked them three years later, the first impresario used his government connections to keep the needed money from being disbursed.
"I can assure you that my father had never heard of the Beatles," Sarid said in a follow-up telephone conversation. "The promoter, of course, didn't come to the government and say, 'I don't like this other guy, and I don't want him to get the money.' He said, 'It is a lousy group and will corrupt the spirit of the wonderful, brilliant, pure Israeli youngsters.' He exploited their ignorance."
Israeli leaders in the early 1960s knew almost nothing of popular culture. There is a famous story told of David Ben-Gurion, the founding prime minister, when he read a headline in a mass-selling paper that said Elizabeth Taylor, then among the world's most famous women, was very ill. "Who's Elizabeth Taylor?" Ben-Gurion is said to have asked.

A glance at the printed tickets for the canceled 1965 Beatles concert, copies of which still exist as collectors' items, and can be viewed on the Internet, tell their own story of a bygone era.
The marked price, in the lira currency, then under enormous pressure and now defunct, amounted to about $7.
The Hebrew name for the group printed on the tickets is also worth noting. The performers were universally known as the Beatles, but in Israel, then still trying to create a culture buffered from foreign words and influence, they were Hipushiot Haketzev, or the Beat Beetles (like the bugs).
It was a laborious if endearing effort that no one would bother with today in a country where English permeates daily speech ("sorry," "whatever") and advertising logos, and where many official Hebrew names for new developments simply do not enter the mainstream vocabulary.

Sarid noted that although the official Hebrew name for the Beatles then was Hipushiot Haketzev, many adults dismissed them as Hipushiot Hazevel, or "Dung Beetles."
Esteron, the editor, like others, said the change in 40 years from an isolated, egalitarian and agrarian society to a market-driven, plugged-in, high-tech haven of enormous wealth - and some alarming poverty - had been dizzying and somehow oddly embodied by the story of Israel's relationship with the Beatles.