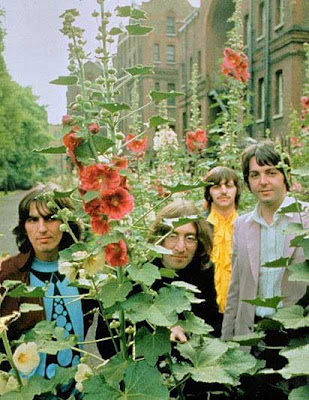 GEORGE 1968
(recalling the inspiration for the song, 'Blue Jay Way')
GEORGE: "Derek Taylor got held up. He rang to say he'd be late. I told him on the phone that the house was in Blue Jay Way. And he said he could find it okay... he could always ask a cop. So I waited and waited. I felt really nackered with the flight, but I didn't want to go to sleep until he came. There was a fog and it got later and later. To keep myself awake, just as a joke to pass the time while I waited, I wrote a song about waiting for him in Blue Jay Way. There was a little Hammond organ in the corner of this house which I hadn't noticed until then... so I messed around on it and the song came."

RINGO 1968
(joking about the song 'Lady Madonna')
RINGO: "It sounds like Elvis, doesn't it? No, it doesn't sound like Elvis... it IS Elvis. Even those bits where he goes very high."
PAUL 1968
(upon returning from India)
Q: "So you feel better after your vacation of meditation in India?"

PAUL: "Yes. Yes. Except for the flight. That's quite a long one, so I'm a bit shattered... but the meditation? It's great!

Q: "What exactly have you been doing? How do you meditate?"

PAUL: "You sit down. You relax. And then you repeat a sound to yourself. And it sounds daft... but it's a great system of relaxation. We meditated for about two hours in the morning and three hours in the evening. And then the rest of the time we sun bathed and had fun."

Q: "Paul, what about the extreme poverty in India? Presumably you saw some of this while you were there."

PAUL: "Oh yea. The Maharishi's idea is to stop the poverty at it's root. You see, if you just give handouts to people, it'll stop the problem for a day or a week, you know. But in India there's so many people that you'd really need all of America's money poured into India to stop it. So you've got to get at the cause of it and persuade all the Indians to start doing things... because their religion is very fatalistic. They just sort of sit down and think, 'God said this is it, so it's too bad. We can't do anything about it.' The Maharishi is trying to persuade them that they can do something about it." 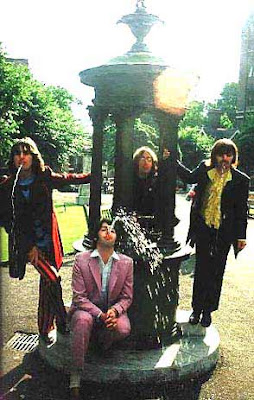 JOHN: "And it was his responsibility for reporting it."

PAUL: (laughs) "They asked me the question, and I gave them an honest answer, you know. I just spoke the truth... and the truth is sometimes painful." 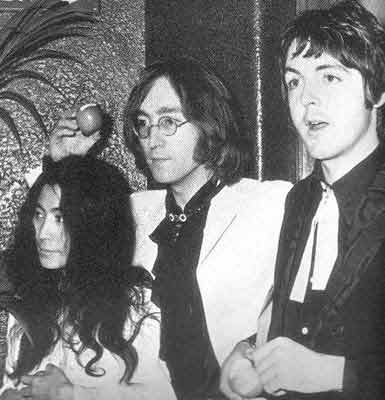 JOHN: "Oh yeah. Well you see, our accountant came up and said, 'We got this amount of money. Do you want to give it to the government or do something with it?' So we thought..."

JOHN: "So we decided to play businessmen for a bit, because, uhh, we've got to run our own affairs now. So, we've got this thing called 'Apple' which is going to be records, films, and electronics-- which all tie-up. And to make a sort of an umbrella so people who want to make films about... grass... don't have to go on their knees in an office, you know, begging for a break. We'll try and do it like that. That's the idea. We'll find out what happens, but that's what we're trying to do."

PAUL: "If you want to do something, normally you've got to go to big business and you've gotta go to, them, the big people, you know."

JOHN: "You don't even get there. Because you can't get through the door 'cuz of the color of your shoes."

PAUL: (laughs) "But you know, people are normally... Big companies are so big that if you're little and good it takes you like 60 years to make it. And so people miss out on these little good people. So we're trying to find a few."

Q: "Paul, is that because of your background? You came from a poor background."

PAUL: "There's a little bit of that."

Q: "Was it tough for you to get started?"

JOHN: "Well, no tougher than anybody else, you see, but George said, 'I'm sick of being told to keep out of the park.' That's what it's about, you know. We're trying to make a park for people to come in and do what they want."

RINGO 1968
(on The Beatles' changing image)
RINGO: "When we first started we were the nice clean moptops and every mother's son, and everyone loved us. And then suddenly, you know, there's a few things that they don't understand... and they don't get... or they don't like, and maybe it turns them off a little bit. It's just that we're men now. We're a bit older than those four lads that started out... and we've got alot of things to do, you know. And you've got to do a few of them. It doesn't matter what people say. You can't live all your life by what other people want. We can't go on forever as four clean little moptops... playing 'She Loves You.'"

GEORGE 1968
(on being a musician)
GEORGE: "I'm a musician and I don't know why. Many people feel that life is pre-destined. I think it is vaguely, but it's still up to the person which way your life is going to go. All I've ever done is keep being me, and it's all worked out... like magic. I never planned anything, so it's obvious that that's what I am destined to be. I'm a musician. It's my gig." 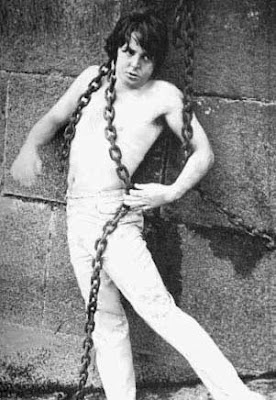 Collection: In Their Own Words