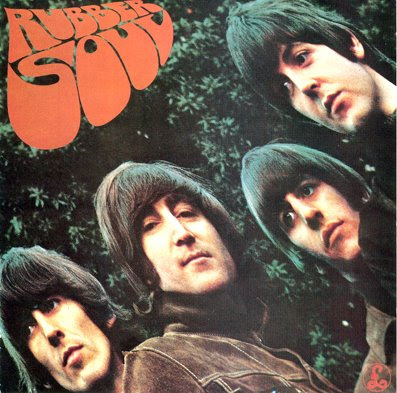 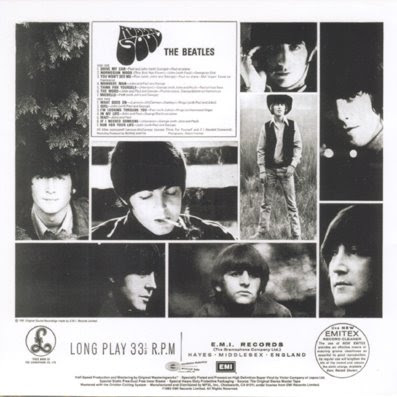 Detail : The Beatles sixth official album release.
The first Beatles album, to include all four as composers, and have no cover versions.
And the last time that The Beatles would release two albums of new material in one year.
The title came from an expression that black musicians were using to describe The Rolling Stones, which Paul then parodied from the original "Plastic Soul" to "Rubber Soul".

This album had advance orders of over half-a-million, eventually selling around 750,000 in the Britain. Global sales are estimated ot over 3,000,000 units. Once again (of course) the American issue did not contain the full tracklisting, instead taking two tracks from the British "Help!" album, and leaving some off, which would appear on later releases.

It should also be noted that during the sessions for this album, on 4th November 1965, The Beatles recorded another track for the album (with 2 takes). It was an instrumental that was never returned to, nor remixed ... "12-Bar Original".

The cover was the first to NOT have The Beatles name on the front. The cover photography is by Robert Freeman. 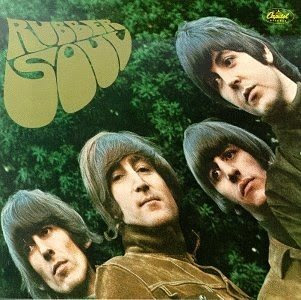 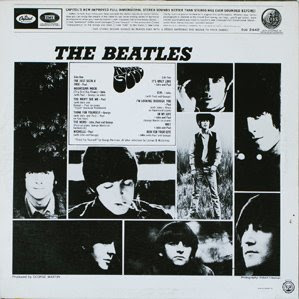 Mono/Stereo Differences
"What Goes On" The mono version is missing some of the lead guitar at the end, just before the final chord. The full lead guitar part is heard of the stereo version.

Very First pressings (1965) - Mono version
Visibly same as "Second" pressing below, but very first issue had a slightly different studio mix.
It can be recognised by the matrix numbers ending with "-1", This is generally referred to as the "Loud" cut.
This was a mix that was discontinued after a very brief pressing run, when it was realised it was tonally unbalanced.
It lacks body, has a muddled bass, with vocals stretched thin making it sound aggresive and edgy (hence, "loud").
But this pressing is not really louder, and remember, it was withdrawn for a reason ... it is one you can do without.
Attempts at correcting first pressings (1965) - Mono version
Once again, visibly it is the same as "Second" pressing below.
When the bad mono issue was realised above, the mix was corrected and the stampers were changed to have a matrix ending in "-4".
Incredibly, during this change over, there were some that had the dodgy mix on side 1 and on other presses the dodgy mix on side 2 !.
So you will find some with XEX 579-1 coupled with XEX 580-4
and you will find others as XEX 579-4 coupled with XEX 580-1
Again, as stated above, these are not better versions to have. They are not common, but they aren't the intended final product. Indeed, the general public in those days never noticed.

Second pressings (1965) - Mono AND Stereo versions
Ostensibly, this is really the first pressing, after those incorrect "loud" cut versions had been discovered and withdrawn above.
The standard yellow block writing Parlophone label.
The "All rights of the manufacturer" message around the edge of the label now starts with "The Gramophone Co. Ltd."
The label DOES have "Sold in the U.K..." statement.
Matrix number now changed on the Mono version.

Third pressings (1969) - Mono AND Stereo versions
The standard yellow block writing Parlophone label.
The "All rights of the manufacturer" message around the edge of the label starts with "The Gramophone Co. Ltd."
The label does NOT have "Sold in the U.K..." statement.

Fourth Pressings (1969) - Stereo version only
Now with a silver/black Parlophone label.
The "All rights of the manufacturer" message around the edge of the label now starts with "EMI Records Ltd."
The label has one EMI boxed logo.

Fifth Pressings (1973) - Stereo version ONLY
Silver/black Parlophone label.
The "All rights of the manufacturer" message around the edge of the label now starts with "EMI Records Ltd."
The label has TWO EMI boxed logos.

Sixth Pressings (1982) - Mono version ONLY
Now with a yellow/black Parlophone label.
The "All rights of the manufacturer" message around the edge of the label now starts with "EMI Records Ltd."
This release is on a lightweight vinyl.

Seventh Pressings (1995) - Stereo version ONLY
Now with a Black and Silver Parlophone label.
The sleeve has a printed statement which reads:
"This album has been Direct Metal Mastered From a Digitally Re-mastered Original Tape to give the best possible sound quality"
This release is (surprisingly) on a lightweight vinyl.
© Free Rare Mp3 Music Downloads

When I was a kid, I had an LP version of "Rubber Soul" that had a difference at the beginning of "I'm Looking Through You" from that of the later versions (cassette, CD) I owned. Maybe it was a difference between mono and stereo mixes--I don't know.

The difference was a repeat of the high G then D chords (inserting two extra measures) before continuing on to the rest of the introduction.

For some time I thought it might be a scratch in or mis-pressing of the vinal, but it was too clean, had no "pop" and was in the right timing.

I wonder if anyone else had a copy like this?

that was just a regular US stereo issue)