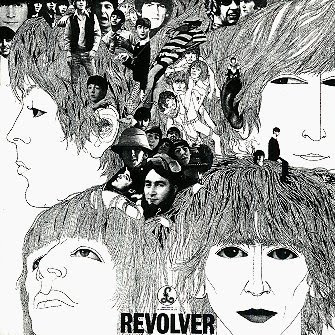 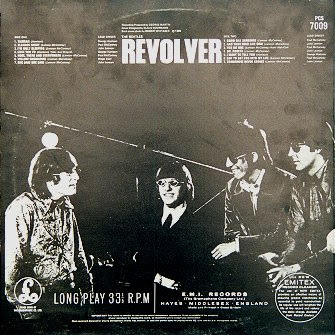 Detail:
The Beatles seventh official album release.
This release came out the same day as the double-A sided single, "Eleanor Rigby/Yellow Submarine" ... the first time that the Fab Four had released a single on the same day as the album from which the tracks came.
Arguably showing the Beatles at their creative zenith. Lyrically and musically innovative, "Revolver" IS a pop masterpiece.
It's original title was to be "Abracadabra", but this was rejected as it had been used by someone else (this didn't stop Steve Miller years later)
Revolver had advance orders of 300,000 in Britain and yet, is only given a final sale figure of 500,000. Globally, sales are estimated at over two million.
Front cover features artwork by Klaus Voormann, a friend of The Beatles from their Hamburg days. Voormann went on to play bass with Manfred Mann (he replaced Jack Bruce !) and later, of course, played with John and the Plastic Ono Band.
Look dead centre at the Revolver sleeve above, and then look at the original Robert Freeman picture below it from 1966 ! ... Klaus Voorman used this picture as the centrepiece (which may explain to you why John looked "odd").
The rear cover photograph is by Robert Whitaker.
The album was also part of "The Beatles Collection" 13 album box set (see Beatles Collection).
On 30th April 1987 this album had it's first release on C.D. which was published in stereo, with a catalogue number of CDP 7 46441 2
And on the same day, the record shop H.M.V. produced a special 12" numbered 3 CD Box Set Comprising:
Help
Rubber Soul
Revolver
+ "Beatles Monthly No.12" - July 1964
This set had a catalogue number of BEA CD 25/2, and was in a limited edition of just 2,500 copies.
The C.D. was also part of "The Beatles Box" 15 C.D. box set (see Beatles C.D. Box).
The album was also available on 4" reel-to-reel tape,
1966 - Catalogue number TA-PMC 7009 (3¾ ips twin-track mono tape) - first edition (mono only) in a cardboard box.
1968 - Catalogue number TA-PMC 7009 (3¾ ips twin-track mono tape)
TD-PCS 7009 (3¾ ips 4-track stereo) these editions in a "jewel" box.
Prior to 1973:
The album was released on stereo cassette tape (1⅞ ips) - Catalogue number - TC-PCS 7009.
The album was also released on 8-track stereo continuous play cartridge (3¾ ips) - catalogue no. 8X-PCS 7009
In November 1987 the album was re-released on cassette tape (stereo only) - Catalogue number - TC-PCS 7009 (Originally released September 1966).

Detail of the Russian sleeve, with DIFFERENT collage 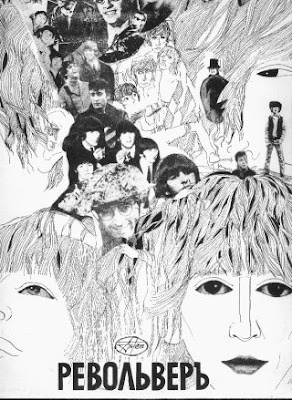