History of the Beatles' Us Singles - 1 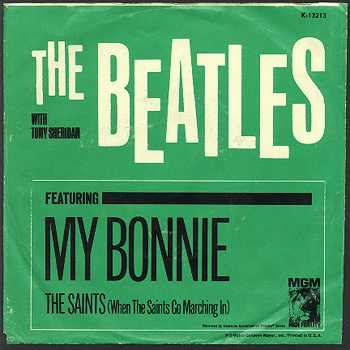 The Saints
(When The Saints Go Marching In)
Traditional
Sung by Tony Sheridan
Engineer: Karl Hinze
My Bonnie & The Saints

History
In 1961, Bert Kaempfert, an Artists & Recordings manager at Polydor in Germany, decided to record Tony Sheridan. He also wanted to use the Beatles as Sheridan's backing group since they were comfortable playing together on the Hamburg stages. On June 22, 1961, the Beatles began a two day recording session at the Hamburg Friedrich Ebert Halle school with Tony Sheridan. At this point, Pete Best was still playing drums. The recollection of engineer Karl Hinze is that these recordings were made on a portable 2-track deck and mixed live to stereo. This means the mono mixes are all reductions of the stereo mixes, and not separate mixes as they are in the case of nearly all the EMI recordings.
In addition to My Bonnie, The Saints, and Why backing Sheridan, the Beatles recorded Ain't She Sweet and the George Harrison - John Lennon instrumental, Cry For A Shadow. For their work, the Beatles earned a flat fee of 300 marks, and all rights to the recordings belonged to Deutsche Grammophon. In 1964, DG then released these recordings through MGM, and Atlantic Records
When released in Germany later that summer, the Beatles were called the Beat Brothers on the label. According to Kaempfert, almost 100,000 copies were sold. It was this record that caught Brian Epstein's eye, and he ordered 200 copies for his NEMS stores. The single, with the Beatles credited properly on the label, was released in England on January 5, 1962.

Live Performances
1962 : My Bonnie was performed at various venues throughout England, and possibly Hamburg.
John took over as lead singer.