History of the Beatles' Us Singles - 4 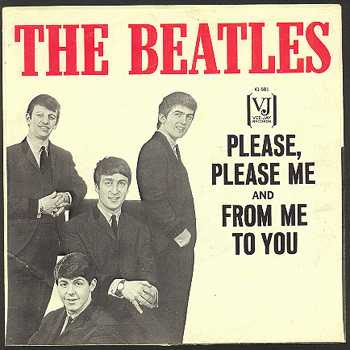 2) From Me To You History
From Me To You was written on the Beatles' coach while travelling from York to Shrewsbury on February 28, 1963. This was during the Helen Shapiro Tour. Takes 1 to 13 were recorded on March 5. The first 7 takes were 'live' in the studio performances. Takes 8 to 13 featured the additional edit pieces, including the harmonica, guitar solo, and the introduction. George Martin performed the final Mono and Stereo mixes on March 14.
In Britain, EMI issued a press release to go with the single, which read:
'Vocally and instrumentally this new deck matches the high spirits of PLEASE PLEASE ME with John, Paul and George chanting and harmonizing expertly. BUT don't get the idea that this is a carbon copy of their last single - in fact it is the most unusual number THE BEATLES have recorded to date.
'In defiance of the tiresome trend towards weepie lost-love wailers, FROM ME TO YOU is a rip-rockin’ up tempo ballad which has a happy-go-lucky romantic story-line.
'EAR-CATCHING HIGH SPOT: Those unexpected falsetto-voice high-kicks on the line "If there's anything I can do".
'OFF-BEAT FINALE: Sudden switch of speed and rhythm for that end-of-the-track instrumental climax.
'UNANIMOUS VERDICT: The sturdy beat plus the unique Beatle-blending of harmonica, guitars and voices plus the thoroughly infectious tune make FROM ME TO YOU another dead-cert Number One chart-smasher!'
On December 18, 1963, the Beatles recorded a special version entitled "From Us To You" to be used on the BBC. Four "From Us To You" programs were eventually broadcast using this recording as the title song. The first was on
December 26, 1963.
First Release
April 11, 1963: Parlophone R5015, England, b/w Thank You Girl
#1 on the English Record Charts
US Releases
May 27, 1963 Vee Jay 522, b/w Thank You Girl
January 30, 1964 Vee Jay 581, b-side of Please Please Me
February 26, 1964 The Beatles and Frank Ifield, Vee Jay 1085
October 11, 1965 Capitol 6063, b-side of Please Please Me
April 2, 1973 The Beatles 1962-1966, Apple SKBO 3403
August 9, 1988 Past Masters Volume I, Capitol 90043
November 1994 Live At The BBC (From Us To You), Apple 31796
November 25, 1995 Anthology I, Apple 34445