Backstage at The Tonight Show

A staff member talks about what it was like to be behind the scenes at the historic appearance of John Lennon and Paul McCartney, who were in New York City to promote their new company, Apple Corps
by Craig Tennis 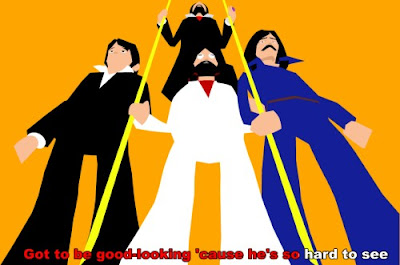 The following is from the book Johnny Tonight, published in 1980, by Pocket Books. The author is Craig Tennis, former Tonight Show staff member.

During guest host stints, there have been a few times when Johnny's professionalism...were missed. The most memorable was years ago in New York, when John Lennon and Paul McCartney had astounded us all by offering, through their attorney to appear on the show. As I recall, they wanted to announce the formation of their new corporation, Apple, and while nobody could understand in the slightest why they would feel the need to promote it by coming on the Tonight Show, we weren't about to blow it by telling them so.
The pre-interview was, as you can imagine, not held in the usual manner. They were at the peak of their popularity...recognized as musical geniuses, and the security precautions that had to be taken for their appearances were taking up all my time. It was decided that they would be brought into the studio via a loading ramp which appeared to go into Radio City Music Hall, but which actually wound around subterraneanly and into the basement of the RCA building. They were brought up in an obtrusive freight elevator under heavy N.Y.P.D. and
internal security guard. They were then put in an out of the way dressing room two floors above where the show was being taped, and they were miraculously, never discovered there by fans. Teenagers had been swarming out all the exits and entrances to the building since dawn, and all day we had been finding girls hidden on the sixth floor in dressing rooms and in closets and even behind water fountains--everywhere.

We also had unbelievable problems with tickets to the show. People of major importance were calling up...demanding tickets when they were all long gone. I remember putting aside two tickets for Simon & Garfunkel, and when they arrived, they discovered that two people impersonating them had picked up their tickets, and there was no way they could possibly get in.
When I finally got a chance to go up and talk to John and Paul before the show, I found that while Paul was easygoing and polite, John was...a wiseacre. The interview wasn't easy for me--in fact I was freaked. How does one interview the biggest superstars in history at the apex of their glory without coming off like a boob? So I went the direct route and tried to find out what basically, they wanted to say to the audience and why.

Apparently, the half dozen or so questions I asked made sense to them, and after the last one--which I don't remember, but at which their eyebrows shot up--they said,"Now, who is this man who's going to interview us, this Joe Garagiola person?" I told them who he was, (all in praise) but they had apparently already made up their minds that they didn't want Joe to interview them.

What they wanted, to my horror, was for me to interview them. I spent five or ten minutes trying to explain to them that that was not possible, but it didn't sink in--at one point they even threatened not to do the show unless I would go on with them and do their interview. My life flashed before my eyes, I can tell you, because their was no way I was going to go out in front of that camera with the Beatles; not only would it have been a ridiculous condition upon which to end my tenure on the Tonight Show, but I knew that it would also cripple my career permanently. Eventually, I talked them out of it and they agreed to go on.

But when they finally joined Joe, disaster struck. He started by asking one or two really silly questions and they went downhill from there. He just sat there saying things like, "Gee, I hope my kids get to see this," and "Boy, am I going to be a popular guy in the neighborhood." It was so inane that the Beatles became visibly uncomfortable, and Joe had to actually let them leave. The Beatles left believing that they had been sloughed off by this guy, and in a way, I guess they had been.

I remember, too, some unfortunate and genuinely stupid highlights of their appearance. First of all, Tony Bennett, had gotten out of a sickbed to bring his eight-year-old son to the studio to meet them. Because of security, he couldnt get near them before the taping. Waiting backstage for them to come off, security whisked them by before he could even say hello. Tony shrugged philisophically, and his son seemed thrilled just having been that close to the legends he considered more important than his own father.

The day before their apperance, I brought over the security director to NBC to meet with the head of our security. The Beatles' man was about six feet, three inches tall, distinguished looking in a blue three piece suit, and unusual for the times, had huge gray muttonchop whiskers. They discussed the routing for nearly an hour. Then when John and Paul were leaving from the underground garage, we were suddenly mobbed by kids who had somehow gotten in. So, what did the head of security do? He grabbed the Englishman by the muttonchops and banged his head against the limousine.