History of the Beatles' Us Singles - 5 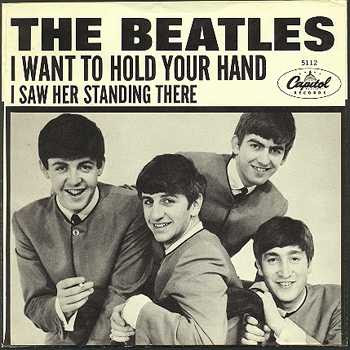 
1) I Want To Hold Your Hand History
This song was written in the basement of Jane Asher's home. The recording session took place on October 17, 1963, and marked the first time that the Beatles used Abbey Road's new four track recording machines. Although the song was mostly perfected by the session date, the Beatles performed 17 takes. Only take 2, when the line "And when I touched you" was hushed, and take 4, when Paul added an 'h' sound after the 's' (shay that shomething), were noticeably different from the others. Both mono and stereo mixing of I Want To Hold Your Hand were performed on October 21, using take 17. The English release occurred on November 29, 1963, with This Boy as the B-Side. The US release became the first number one song for the Beatles.
At the insistence of EMI's German branch, Odeon, the Beatles recorded the German version of I Want To Hold Your Hand, on January 29, 1964. Komm, Gib Mir Diene Hand, used the original rhythm tracks from Abbey Road, but the vocal recording took place at EMI Pathe Marconi Studios in Paris, during the Beatles visit there. In all, it took 11 takes to translate the song from English to German. The song was edited together from takes 5 and 7, with additional mixing on March 10 and 12. In the US, this song shows up on the Something New album (Capitol T2108, July 1964), as well as Past Masters Volume 1.

2) I Saw Her Standing There History
Paul recalled writing this song at his home at 20 Forthlin Road in 1961 or 62. John's major contribution was changing the line 'just 17 never been a beauty queen' to ' you know what I mean.' The song was performed in Hamburg, and later surfaced on the Star Club tapes and albums. The song was properly recorded on February 11, 1963 during the morning session for the Please Please Me album. At this time, known only as 'Seventeen', the Beatles recorded takes 1 to 9. That afternoon, takes 10 through 12 were done. These takes are actually overdubs of the hand clapping. Editing of Seventeen, takes 9 and 12, was performed on February 25. I Saw Her Standing There became the first song on Please Please Me, the Beatles' first album, and was released on March 22, 1963.