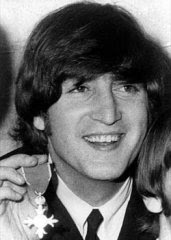 The MBE medal that Beatle legend John Lennon famously rejected has been unearthed in a royal vault.
Now - 40 years after Lennon sent the award back to The Queen - Beatles historians are calling for it to be dusted off and put on public display.

The Fab Four were invested as Members of the British Empire in the Queen's Birthday Honours in 1965, after topping record charts around the world.
But later Lennon decided that he had sold out to the Establishment and returned his MBE to Her Majesty 25th November 1969 as part of ongoing peace protests masterminded with Yoko Ono.

In an accompanying letter Lennon said:
"Your Majesty, I am returning my MBE as a protest against Britain's involvement in the Nigeria-Biafra thing, against our support of America in Vietnam and against 'Cold Turkey' slipping down the charts."
"With Love, John Lennon."

Years later he was quoted as saying: "Lots of people who complained about us getting the MBE received theirs for heroism in the war.
"They got them for killing people. We deserved ours for not killing people.
"In a way it was hypocritical of me to accept it.
"But I'm glad I did really, because it meant that four years later I was able to use it to make a gesture."

Now Beatles fans have established that the medal has been located in a vault at St James' Palace and have written to Yoko Ono urging her to retrieve it.
The medal was found in a cabinet at the Chancery Department of the Royal Household where it has lain untouched for years.
It is still in the presentation case bearing the name John Winston Lennon, and has been stored along with his protest letter.
Beatles history experts regard it as one of the most important pieces of Beatles history and are calling for the medal to be exhibited in the city 40 years after it was returned. 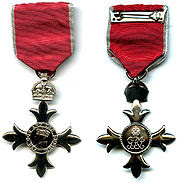 It has been suggested that it should be given a permanent home at "Mendips", the childhood home John shared with his Aunt Mimi in Woolton, which was bought and donated to the National Trust by Yoko Ono.
Lennon had originally sent the medal to his Auntie Mimi and she kept it in pride of place on her mantelpiece, until John collected it and returned it to The Queen.
Liverpool Beatles Appreciation Society founder Gene Grimes said: "The Palace are sitting on a unique piece of Beatles history and it should not be left to gather dust in a draw.
"There are several places in Liverpool where it could be displayed.
"It would be great on the mantlepiece at Mendips, where his Aunt Mimi kept it originally, or at the new Museum of Liverpool that is being built.
"John's decision to return the MBE should be respected, but I also believe that showing it to the public would be appropriate - since it would raise awareness of John's campaign for peace.
"The medal is a vital piece of Beatles memorabilia and should be exhibited for John's fans to see."
A Buckingham Palace spokesman confirmed that the MBE has been located and that it remains the property of John Lennon's estate.
The spokesman said: "John Lennon's MBE is being taken good care of and is in storage at the Central Chancery, St James' Palace.
"It has been retained since the day Mr Lennon returned it, but in order to decide whether the medal could go on display in a museum, we would have to establish ownership first.
"It could be up to Yoko Ono as she is the custodian of John Lennon's estate."
Gene Grimes added: "We thought John's MBE must have been melted down or put in a new box and re-cycled.
"It's wonderful to know that it has been kept safe all these years.
"John's memory will live on for ever in his music but this MBE is a very precious memento.
"We'd love to see the medal on public display in Liverpool where it belongs.
"It would a great reminder of John's message of love of peace that he always believed in."