She Loves You Gallery

Although not the first Beatles hit in America (that was I Want To Hold Your Hand), and not even the first Beatles record released in America (that was Please Please Me), She Loves You is the Beatles record that most fans associate with Beatlemania in America, with Ringo's exciting drum opening, to the coining of the quintessential Beatles catch phrase, "Yeah, Yeah, Yeah!"
The Beatles performed She Loves You on their first appearance on the Ed Sullivan show on February 9, 1964, and it is the final song the Beatles perform in the movie A Hard Day's Night.
She Loves You was recorded by the Beatles at EMI Abbey Road Studio 2 on July 1, 1963. Mono mixing and editing was performed on July 4. She Loves You was first released as a single on Parlophone Records in the UK on August 23, 1963, and the next month on Swan Records in the US on September 16.

The label of the first release from September 1963 of She Loves You on Swan Records in Philadelphia. The Beatles were already causing riots in London, but this 45, the third Beatles record in the US, didn't chart.

A counterfiet copy of the original Swan release of She Loves You. Common to these counterfiets are the lack of bright red color. Other clues that this is a counterfeit are the blotchy and off-center label printing.

A typical label of the more familiar second release from January 1964 of She Loves You/I'll Get You on Swan Records, released after I Want To Hold Your Hand finally caused Beatlemania to spread to the US. This release of She Loves You sold over two and a half million copies and was Swan's only number one record. 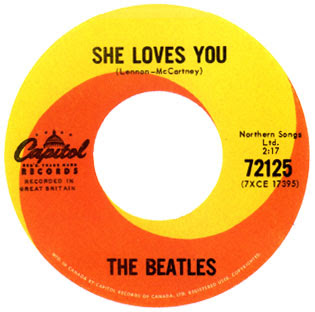 This is the Capitol of Canada version of She Loves You/I'll Get You, released mid-September, 1963, shortly after it was released on Swan in the US. Capitol of Canada released all of the pre-Capitol singles, including Please Please Me/Ask Me Why, Twist and Shout/There's A Place and Love Me Do/P.S. I Love You. 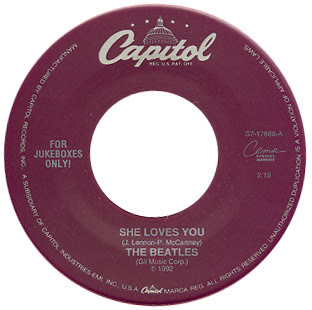 This is the only US Capitol release on a 45 of She Loves You. It was pressed in red vinyl. These were made in 1992, as part of a series of 45s on colored vinyl labled "For Jukeboxes Only!" but were also sold in record stores. 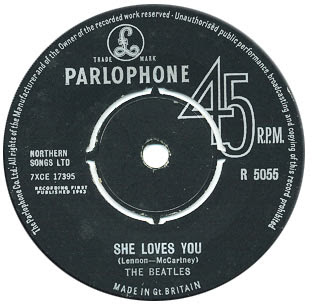 She Loves You as it was first released on 45 in the UK on Parlophone Records, on August 23, 1963, backed with I'll Get You as it later was in the US. 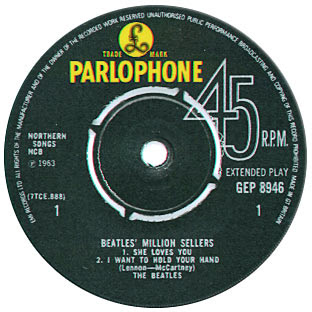 She Loves You was also released in the UK by Parlophone Records on an EP called "Beatles' Million Sellers" on December 6, 1965, along with I Want To Hold Your Hand, Can't Buy Me Love and I Feel Fine.

On shaky legal ground, but figuring they already had the rights to release She Loves You in the US, to further cash in on the growing Beatlemania, Swan released Sie Liebt Dich backed with I'll Get You (in English) credited to Die Beatles on May 21, 1964. This was the only release of Sie Liebt Dich on a 45 in the US.

The rare Swan promotional (DJ) version of Sie Liebt Dich/I'll Get You. This is identical to the stock copies, except that is printed in black on white, and has two large X's above the title. 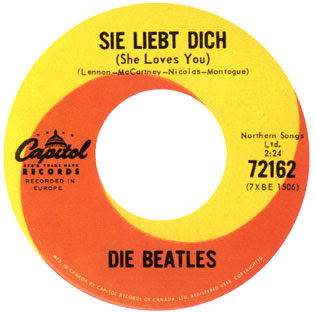 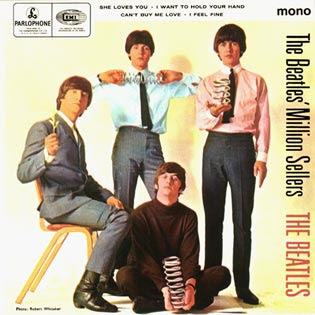 This is the cover of "The Beatles' Million Sellers" EP released by Parlophone Records in the UK in December 1965. This EP contained She Loves You, I Want To Hold Your Hand, Can't Buy Me Love and I Feel Fine. 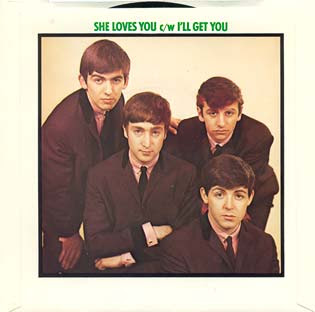 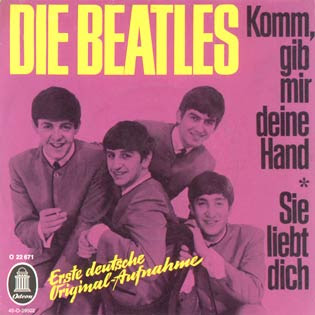 This is the picture sleeve issued with Komm, Gib Mir Deine Hand/Sie Liebt Dich in Germany by Odeon Records in 1964. This picture is the same shot that was used on the I Want To Hold Your Hand picture sleeve made by Capitol Records in the US.